My first event of 2014 had me providing Emcee services for the wedding of Chris DeMonte and Kayte Steele. Their wedding date just happened to be February 15—the day after Valentine’s Day! So, to say love was in the air would be an understatement. Their wedding took place at the Ramada Plaza Fort Walton Beach, a beautiful venue on Okaloosa Island in Fort Walton Beach, FL.

DJ Irving G and I began the festivities by providing Wedding Ceremony Sound on the beach. With our cordless battery powered system, everything looked clean and sounded great! Classical music set an elegant atmosphere during the seating of the guests. For their entire processional, Chris and Kayte asked for an instrumental cover of the Phillip Phillips song “Home,” performed by the Piano Guys. The song is a meaningful selection for the couple; it provided a soothing air of remembrance as Chris began the procession by coming down the aisle carrying a framed photograph of his mother, then built to a perfect crescendo as the bride made her entrance.

Upon the officiant’s pronouncement of the couple as now being “Mr. And Mrs. Chris DeMonte,” we launched into the original, more upbeat version of “Home” by Philip Philips as the bride, her groom, and the rest of the wedding party danced and jived their way back down the aisle.

Inside the Ramada’s Ambassador Ballroom, the décor looked amazing with a gorgeous centerpiece of crystal and drapery suspended above the dance floor along with the floral arrangements by Connect with Flowers. 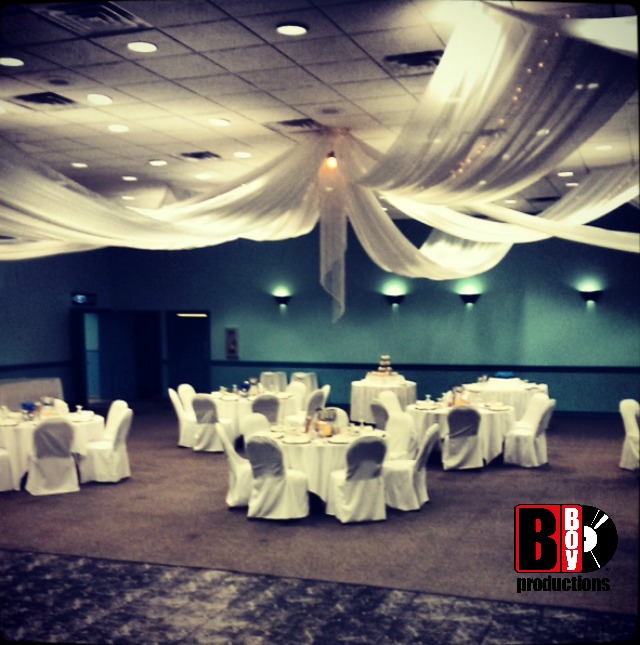 The main cake table sported a tower of vanilla cupcakes just waiting to be devoured. But what most guests stopped to admire was the groom’s cake—a miniature replica of a professional wrestling ring, complete with figurines of “Macho Man” Randy Savage and his beloved Miss Elizabeth hoisted upon his shoulder. The cake was the creation of Adonna’s Bakery. 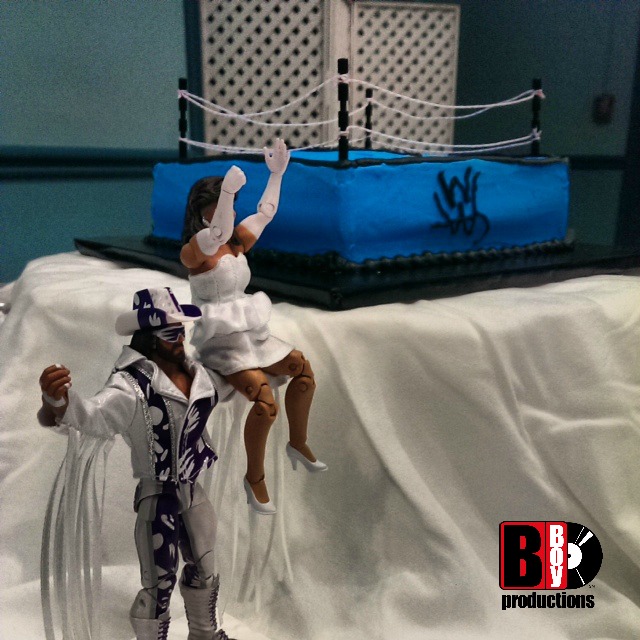 Did I mention Chris is a huge pro wrestling fan (perhaps you gathered that already from the groom’s cake)? Never was this more evident than during the wedding party’s official grand entrance. In my best ring announcer voice, I introduced the bride and groom as “the new undefeatable tag team champions of the world”. They entered to a thunderous standing ovation as the classic “Pomp and Circumstance” (the Macho Man’s entrance music) played in the background. It was an unforgettable moment for everyone!

Chris and Kayte shared their first dance as husband and wife to the son “Wanted” by Hunter Hayes. So as not to spend time on a lot of formalities later in the evening, the Father/Daughter dance immediately followed, featuring “Vienna” by Billy Joel—a song with very special meaning for Kayte and her Dad.

To set the party tone, DJ Irving G treated the guests to a short dance set before dinner was served. After dinner, the dance floor filled up with couples during our Anniversary Countdown then stayed full as DJ Irving cranked out hit after hit and the guests danced the night away!

Our signature “Garter Switch” was quite a hilarious spectacle! All the guests gathered around for not only a better view and a good laugh but no doubt a classic picture or two as well. 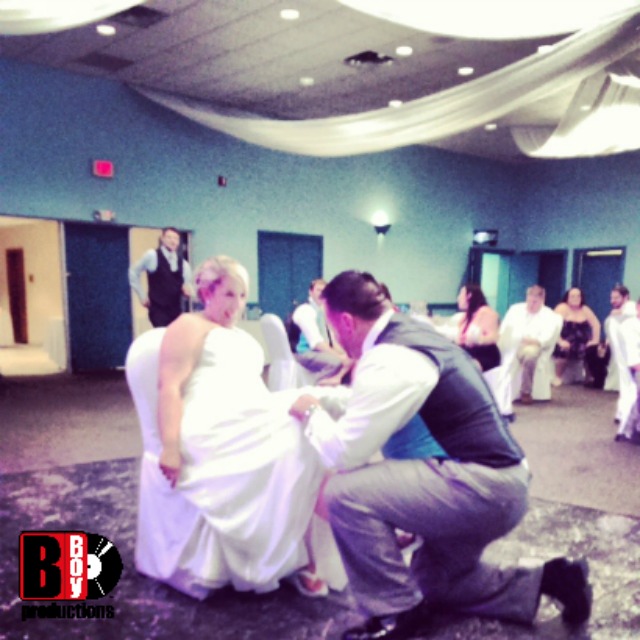 Kayte and Chris were one of the most easy-going and genuinely grateful couples I’ve ever had the pleasure to meet. I wish them a lifetime of celebrations and hope our paths cross again.