Dj’ing the “Dream Weddings” at the Empire State Building 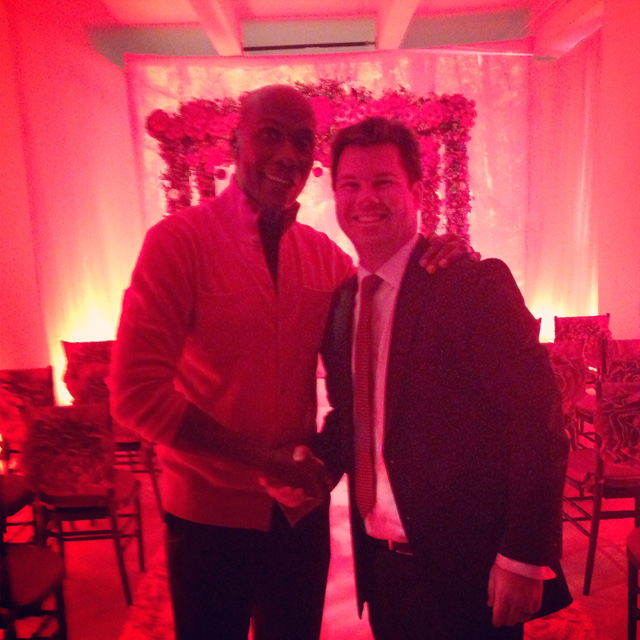 So when arguably the most renowned international event planner, Preston Bailey, calls and asks if you’d be available to work a high profile event at the Empire State Building, what do you do?  You immediately go to your calendar praying to God you’re not already booked.  Once you see you’re available, you get back on the line and say that you are absolutely available.  This was literally how this event came about.

What was this event?  Well, to start, the Empire State Building only allows weddings at their venue 1 day a year – Valentine’s Day (good trivia knowledge for you).  Preston Bailey decided to hold his own personal wedding there at midnight to kick off Valentine’s Day.  He also held a contest where he picked 3 winning couples and designed their wedding for them.  Their weddings were to happen on Valentine’s Day in the same venue where Preston had his and the winning couples could each invite up to 30 of their friends/family to attend.  The gist of the contest was to create a 60 second video ad where you’d tell your story, why you’d want to have your wedding at the EmpireStateBuilding and what it would mean to have Preston design it.  The most creative and moving stories won.

This was my (and come to find out Preston’s) first time running 3 weddings simultaneously at the same venue.  It took a ton of planning and coordination to make this come off without a hitch and to give each couple a unique, individual feel for their wedding.  We had a few subsequent meetings with the Preston Bailey staff (all of them were incredible to work with – from Kathy Romero, Director of Weddings/Event Planning & Client Relations to Brenda Della Rosa, Director of Online Content, to Xoua Vang, CEO of the company) to come up with the game plan.

Preston has a reality show on the WE network and this was being filmed for an episode.  Additionally, there were various media outlets – from local NYC News 1 channel to the AP to People Magazine – reporting on the event.  What a way to kick off the 2013 wedding season!

In addition to Brian B. DJ’ing the reception and providing PA support for the ceremony, we were able to showcase the latest additions to the B-Boy staff, guitarist/vocalist Matthew Cutillo and guitarist Craig Graham.  Both musicians are superbly talented and the ultimate professionals.  Craig played in our cocktail hour/waiting area and Matthew played for the ceremonies and lunch hour.

We loaded in the day before the event.  In case you don’t know, security is tight at the ESB.  You can only load in at certain times during the day, must have 2 forms of ID to enter and they have a full body scanner, similar to the ones you’d find at the airport or other government buildings.  One walk around the venue and you knew this was definitely a one-of-a-kind event.  The décor was some of the most stunning I’ve ever seen and this was just on set-up day. 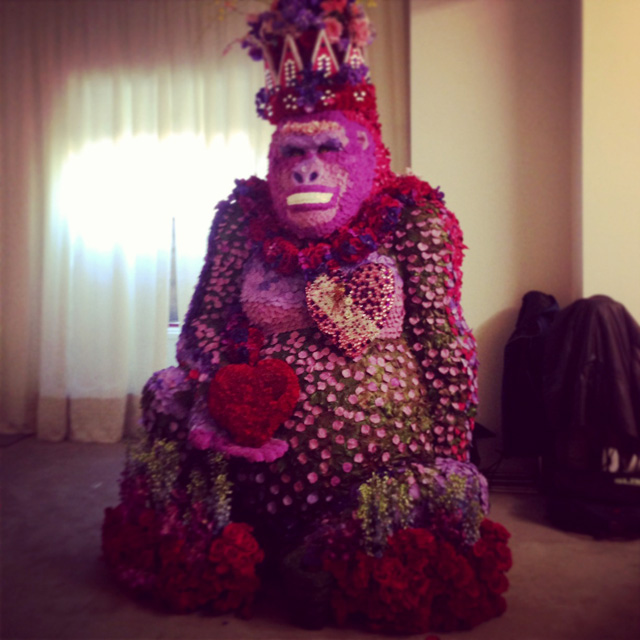 We finished set-up in an hour or so and then headed to rehearsal (off-site at a different location).  The couples were all very nice and so excited to have been chosen, which made it all the more special.  Camera crews were there as well documenting the rehearsal.

The next day we arrived at 7AM for a 9AM  start time.  All the couples and their  guests were in the waiting/cocktail hour area.  The floral décor in that room was amazing and had a window view unlike any  other. 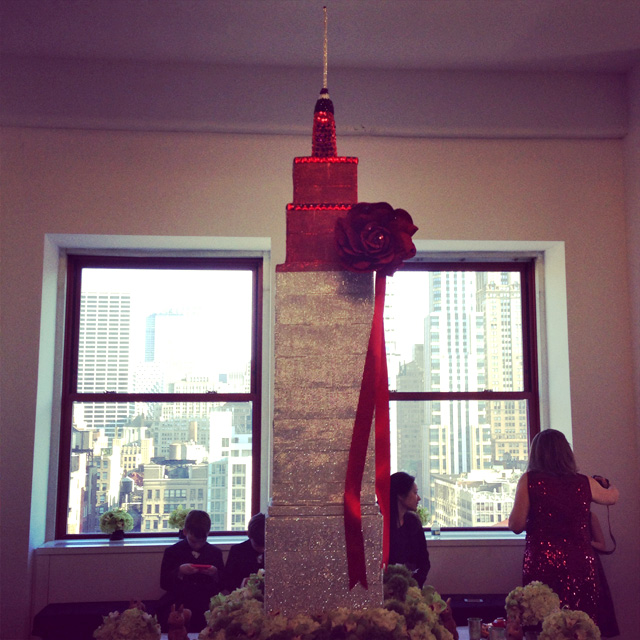 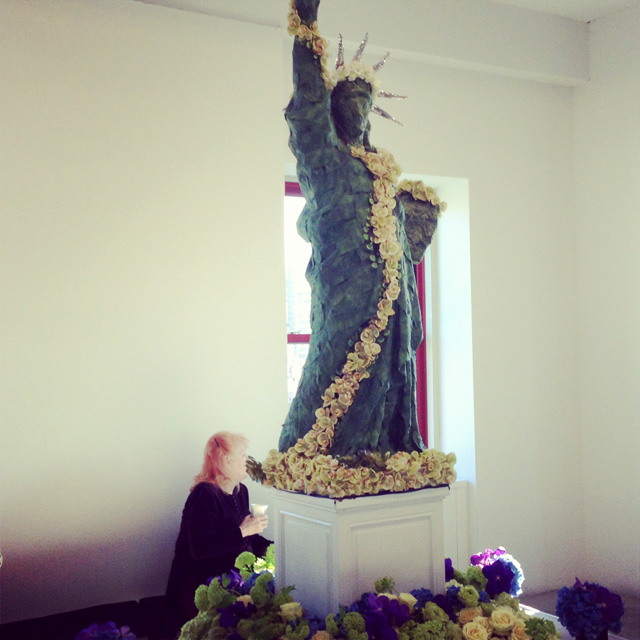 Craig provided the jazz music as they waited for their ceremonies to happen. 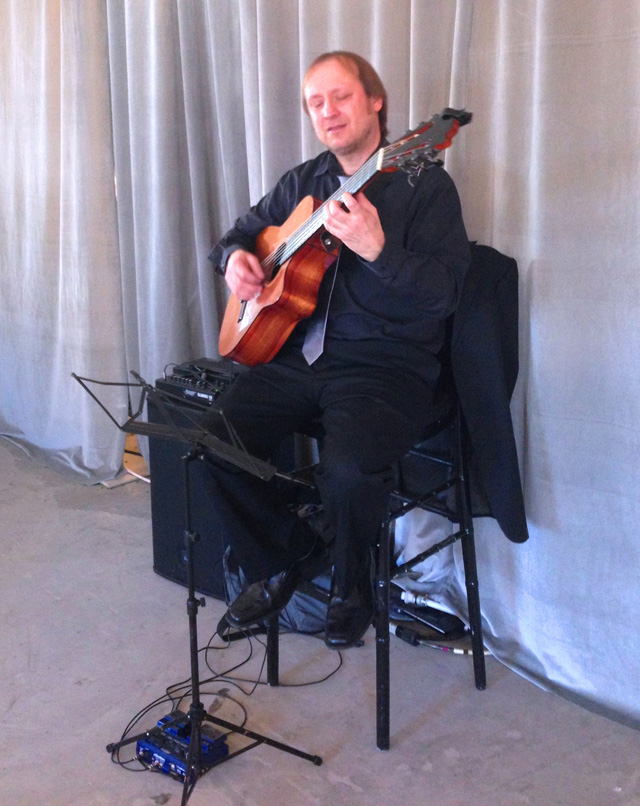 Ceremony times were 9AM, 10AM and 11AM.  Each ceremony was approximately 20 minutes.  As soon as the ceremony ended, the ceremony décor was changed for the next couple.  It was so impressive to see the look completely change and for it to happen so quickly.  Preston decided to go with a “seasonal” feel for each wedding. One couple had a “winter” theme, another had a “spring” theme and the third couple had a “fall” theme.  They all looked amazing but I was partial to the fall.  Not only is that the season when my wedding took place, but the colors were just so vibrant …especially in person. 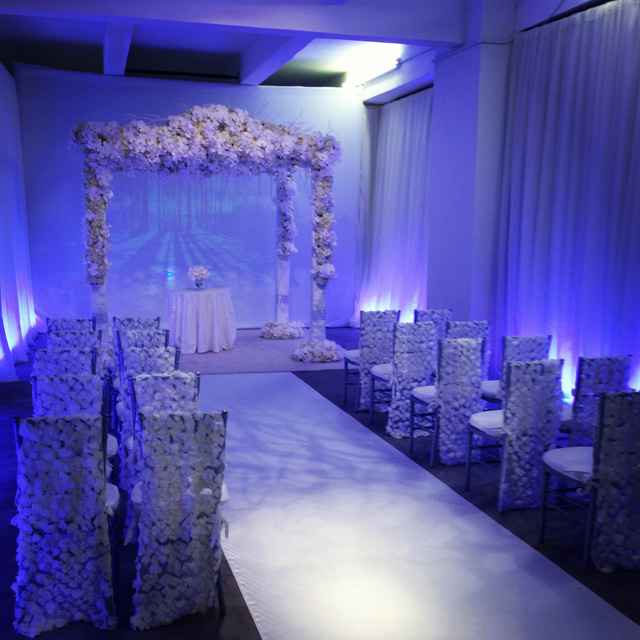 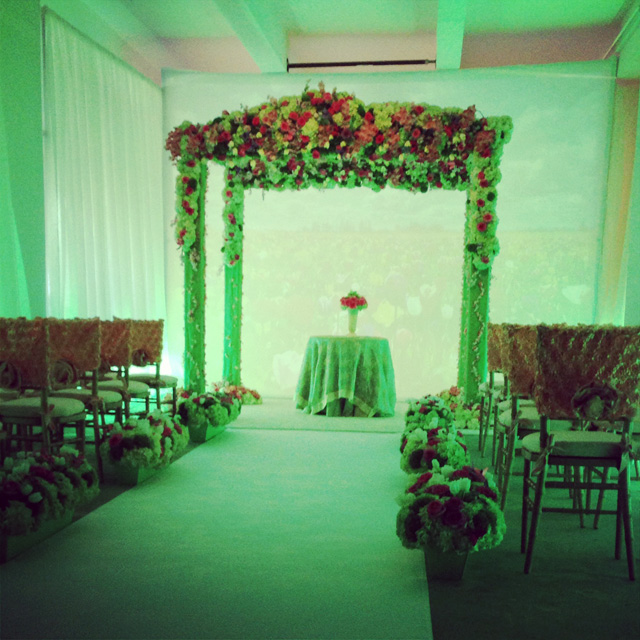 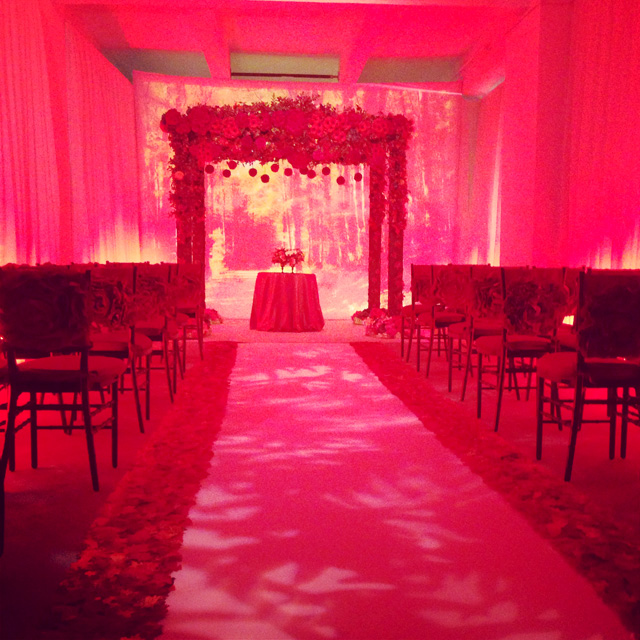 Matt absolutely killed it on vocals and guitar for the ceremonies.  One of the tunes selected was “Marry Me” by Train.  Have you ever tried singing a song with that high of a melody line at 9AM?  Not many can pull it off.  Matt did so and was just exceptional.  We had nothing but compliments about his talent. 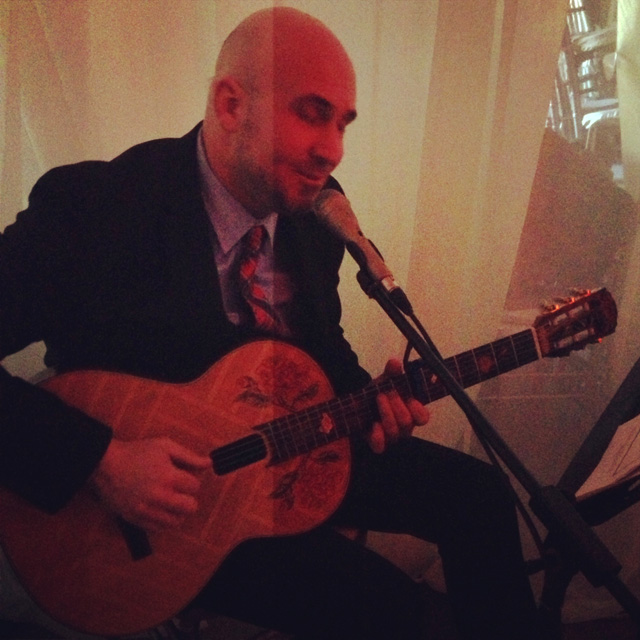 Seguing into the lunch hour, each couple had their private dining room themed to their season.  While I was partial to the “fall” season for the ceremony, the “winter” dining room was my favorite.  The crystals hanging from the centerpieces were stunning. 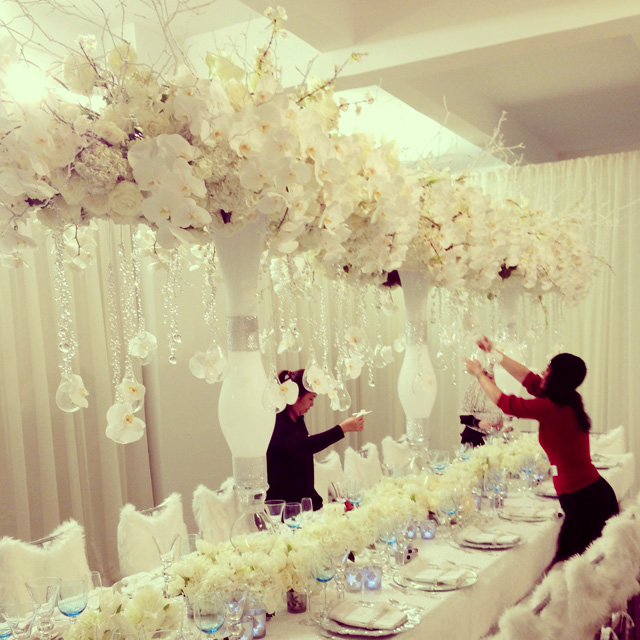 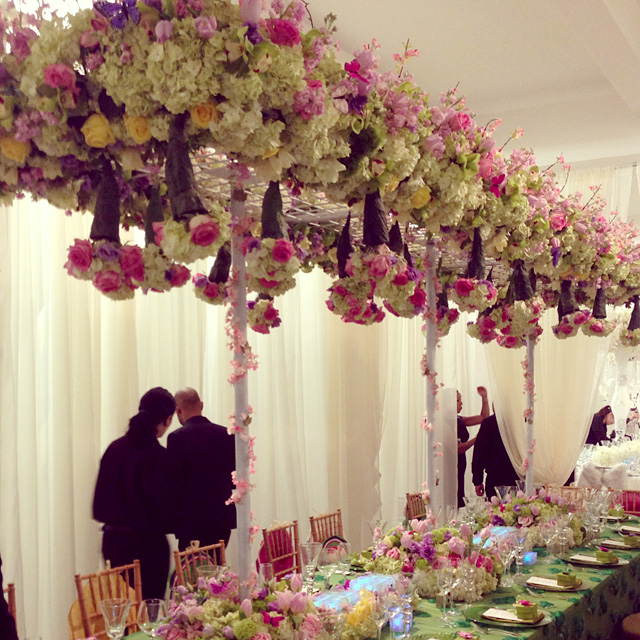 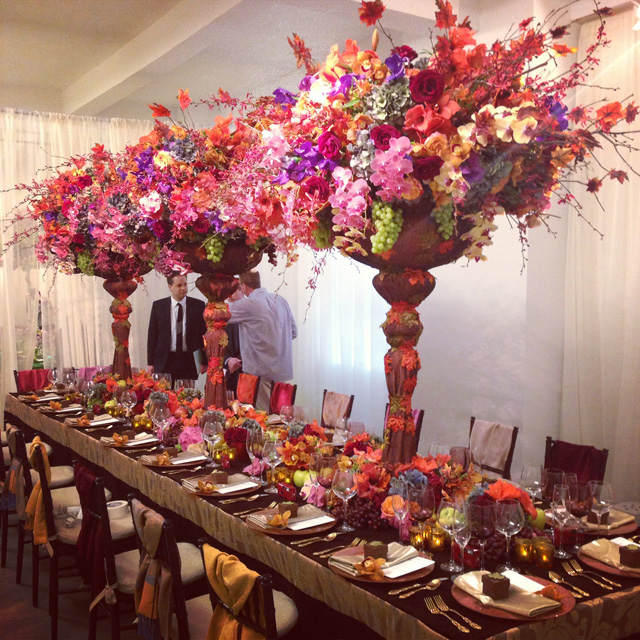 The caterer, Cardona Catering and Restaurant Consultant Group, was unbelievable.  Ricardo, the chef and owner, was completely down to earth and the food was so delicious.  Presentation?  What can I say?  It was like a 5 star restaurant experience.

After lunch, we transitioned all the guests to the reception part of the space.  This area was the exact same area that Preston used literally 12 hours ago. The walkway was decorated with different purple and pink florals hanging from the ceiling along with crystal.  LED lights through the sheer panel drapes in the ceiling helped accent the floral choices. 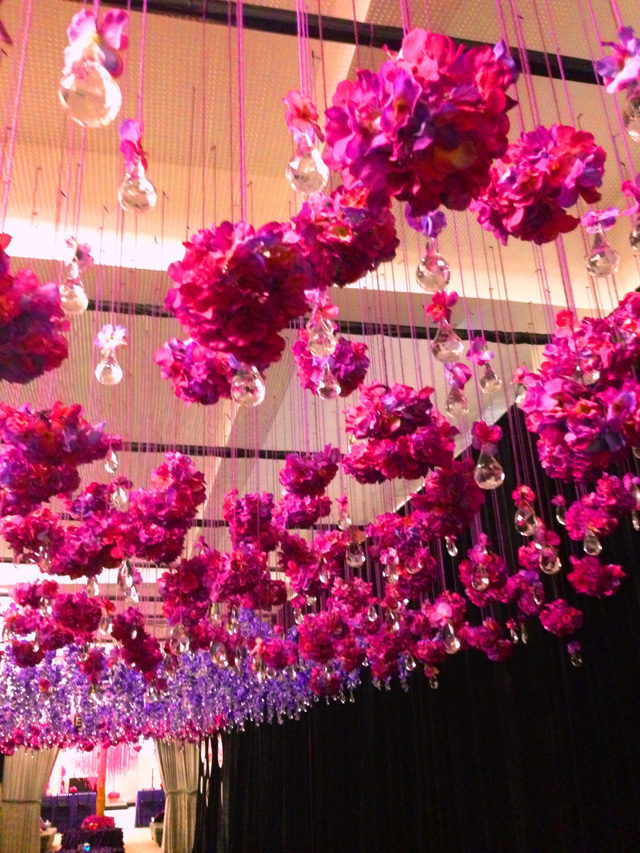 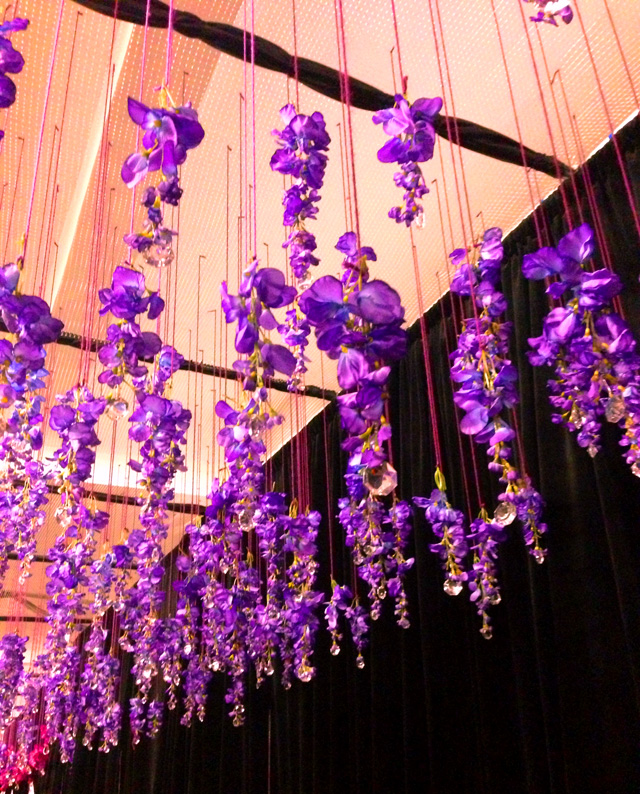 Once in the reception area, it took your breath away!  The dance floor had floral print decals and the pillars were covered with flowers from top to bottom. 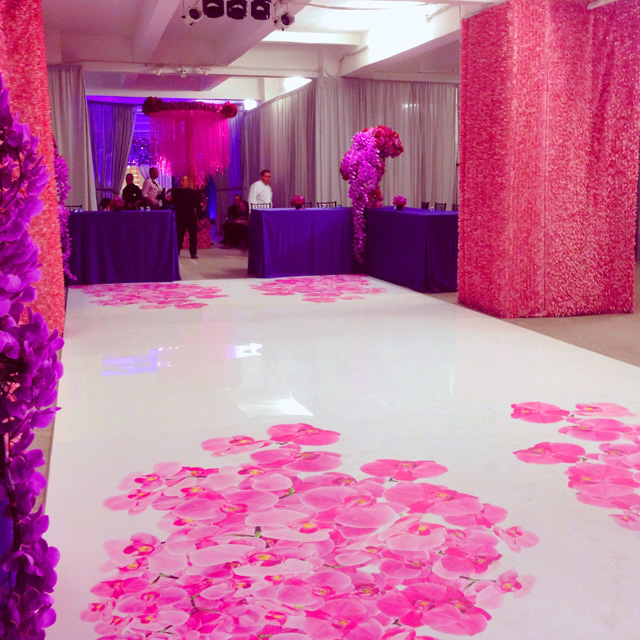 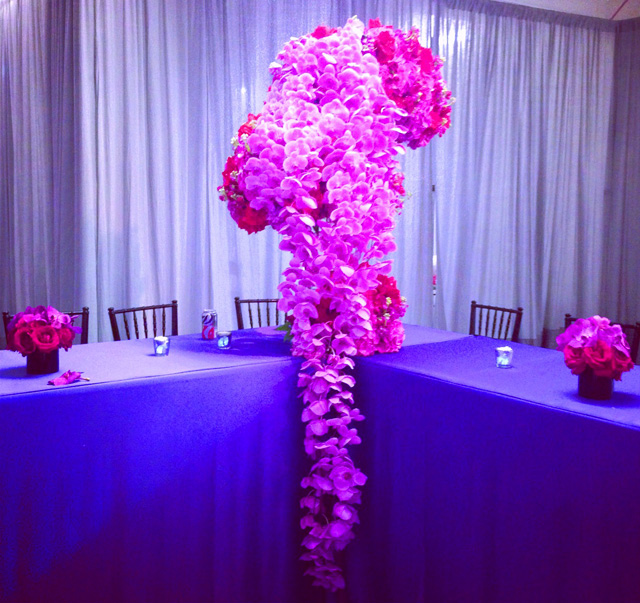 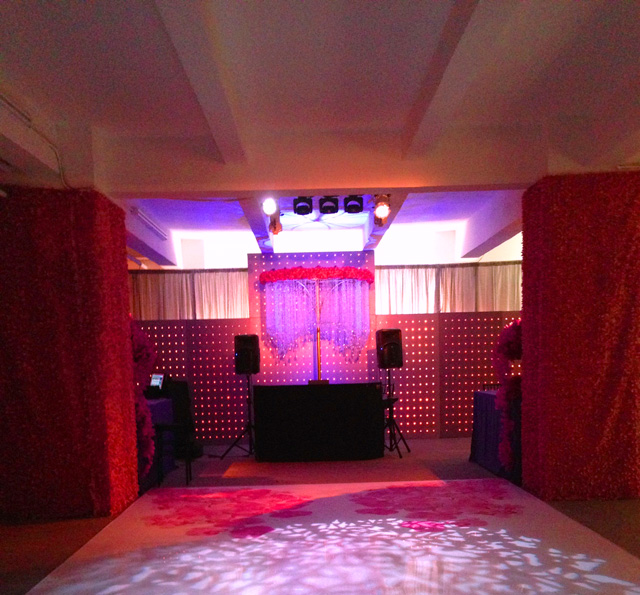 It was quite a challenge to give every couple exactly what they wanted, with their tastes being so varied, but at the end of the event we know we accomplished just that. The dance floor was packed from start to finish and the couples, guests and the Preston Bailey staff had nothing but complimentary things to say.

The event was a total success.  After what ended up being a 14-15 hour work day, my amazing wife said we could order pizza for Valentine’s Day dinner and I could make it up to her the following night.  How did I get so lucky?  We hope to work more events with Preston Bailey and their team.  We’re so thankful for the opportunity to showcase our company to them and the nation.  Be sure to check out the WE TV for “Preston Bailey Dream Weddings” and see the episode for yourself.