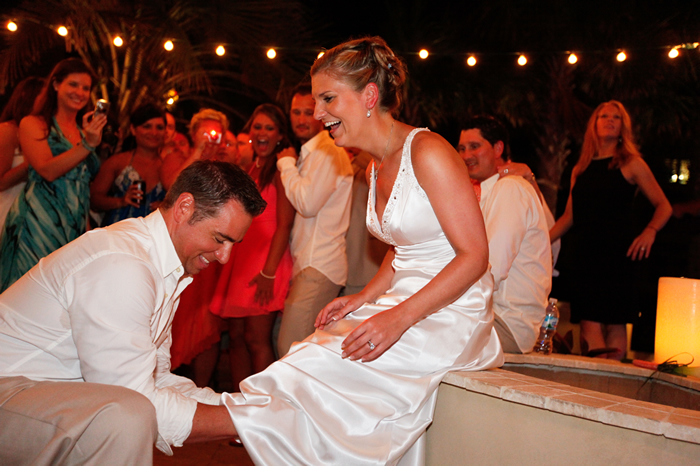 It’s time to wrap up our 3 part series on wedding reception formality music.  The Grand Entrance and main family dances are all pretty well known.  But what other formalities do you need music for?  This post is going to answer just that.  Here are the typical ones:

Most people wouldn’t even think about needing music for these areas but picking the right tunes can definitely be the “icing on the cake” to your reception.  While the Grand Entrance music sets the tone, these formality song choices build on the theme/vibe you’ve selected for your party.  Let’s jump right into it.

Toasts
The toast music could also be referred to as walking music.  Think about live productions like the Grammy’s, Oscars or variety shows.  When someone wins an award or a transition occurs, there’s typically always background music being played.  Why is this important?  It keeps the dreaded (and awkward) “dead air” from occurring and the energy from dying off.  It’s a subtle thing but can really make a big difference.  In the context of the wedding toast, you can go 2 different ways.  This can be simple instrumental music (think instrumental versions of pop or dance songs) or it can be a personalized song to the toaster.  The toasters are usually family members or friends that know the bride/groom pretty well, so it could be a song that is an inside joke between the two people or an artist you both grew up listening to, the college fight song of the school you both attended, etc.  The audience doesn’t always have to get it. If a bride or groom doesn’t have song picks in mind and wants to defer to us, we’ll make sure to read the crowd energy and pick something that is appropriate for that moment.  In some cases, it’s an upbeat track.  There are other times where it could be a tender moment and it would make sense to have a slower track ready.  We’ll always have about 3 or 4 tracks cued and set to fit any mood.

Bridal Party Dance
As a “stand alone” formality, the bridal party dance has been slowly fading away over the years.  However, this formality can act as vital transition between the family dances and the open dancing segments.  While our DJs are the best at getting people on to the dance floor for open dancing sets, why not use this dance as a way to generate a full dance floor before open dancing, as well as capture a moment on the dance floor with just you, your fiance and your bridal party?  For large bridal parties, you can have just them with the bride & groom.  With the smaller bridal parties, you can invite their significant other or immediate family to join them.  The key to this dance is picking something that is upbeat.  Slow songs can not only be uncomfortable (especially if you have groomsmen and bridesmaids that don’t really know each other) but it can make going into the open dancing segment all the more difficult for your DJ and your crowd.  So what songs should you use?  No, you don’t have to go with the predictable “We Are Family” by Sister Sledge song selection.  We personally like to find out what is the go to genre for your crowd and have you pick a song from there. You don’t want to necessarily pick the hottest track out, because some people will really want to dance to that.  Also, don’t go with a line dance.  The line dances (even the cool ones like Gangnam Style or Cupid Shuffle) are stuff that everyone will want to dance to, so you’ll inevitably have to play it again later if you use it for this formality.

Cake Cut
Ah, the cake cut.  This is THE formality which people always forget about picking a song for. Like the toast, this is used as walking music to move people from the dance floor to the cake cutting area and then as pictures are taken of the cake (or these days cupcake) being cut and fed to their partner.  When picking a song here, go back to the feel you’re going for with your reception.  Do you want it elegant?  Do you want it to be a party?  Do you want it comical?  Whatever it is, take the opportunity to build on that theme with this selection.  Some of the more popular ones we’ve done recently:
*Sugar, Sugar by The Archies (from the hit show “Cake Boss”)
*Cut The Cake by Average White Band (upbeat and fits the theme perfectly)
*That’s Amore by Dean Martin (iconic pick!)
*Hit Me With Your Best Shot by Pat Benatar (a little tongue in cheek)

Bouquet Toss
The key to the bouquet toss is picking a song for the ladies!  It needs to be a woman anthem.  This song choice usually goes in waves and is 99% of the time a top 40 type track of that time period. In the 60s, it was “Respect.” In the 70s, it was “Bad Girls.”  In the 80s, it was “Girls Just Want To Have Fun.”  In the 90s, it was the “Lady Marmalade” remix by Christina Aguilera, Mya, Lil Kim and Pink.  In the 2000’s it’s been “California Gurls” by Katy Perry and “Single Ladies” by Beyonce.  So far in 2013, “Call Me Maybe” by Carly Rae Jepsen is starting to become the go to song selection.

Garter Removal
There are a lot of couples who don’t see the Garter Removal and Garter Toss as 2 separate formalities.  But they really are. By having 2 songs, it allows us to segue between the 2 formalities a lot each easier by fading out the song playing and starting the next one.  For the removal, it’s usually either a comical choice or a more sensual choice.  Everything from “Oh Yeah” to “Let’s Get It On” to “Drop It Like It’s Hot” to “Sex On Fire” has been used.

Garter Toss
This being the opposite of the Bouquet Toss, we’re looking for a male driven type song. There’s not a whole lot out there being written with this lyrical bent so typically the song pick is a bit more retro.  Songs like “Welcome To The Jungle” or the Cops Theme “Bad Boys” are still great choices.  Lately, “Sexy and I Know It” by LMFAO has been used and fits great.

Money Dance/Dollar Dance
This formality, much like the Bridal Party Dance, has been done less and less over the years.  When it does get used, we push for the “genre medley” style.  Back in the 90s, it was a slew of love songs.  Not only is it awkward to dance to those slower tempo songs with strangers but it can suck all the life out of the party if this drags on for 25-30 minutes.  The “genre medley” is where we’ll switch genres every song and try to keep it upbeat.  It’ll go from, say, a motown track to funk/disco to maybe hip hop to big band.  This keeps people guessing and is a whole lot more fun.  This area doesn’t require song picks from the bride and groom (unless of course they want a few played).  Leave it in the DJ’s hands and they’ll pick what’s appropriate for the mood and feel of the event.

So there you have it!  All the reception formalities have been covered.  We hope this has been helpful. Of course, as clients of B-Boy Productions, we’ll be sure to give you the most up-to-date list of song suggestions that we have.  We’re constantly updating it, so you won’t be getting a list that hasn’t been touched since 1984.  Happy song picking!